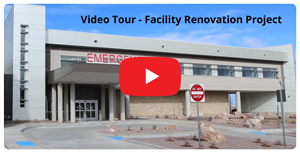 Read More About Us


Our staff of highly trained professionals works closely as a team to provide your healthcare services. Through the leadership of our Board of Trustees, Mt. San Rafael Hospital continues to make improvements to its facility, acquire new technology to improve services, and attract talented physicians to our community.

1905: The first training school for nurses west of the Mississippi is opened at Mt. San Rafael Hospital, with five students. This school is in operation until 1932.

1906: An addition as large as the original building is added to the hospital in order to admit more patients and administer better care with improved and expanded facilities.

1907: About 2,000 lots surrounding the hospital are purchased from Dr. Beshoar for "one dollar and other valuable considerations." This is to prevent houses from being built too close to the hospital.

1932: The training school for nurses consolidates with Glockner Hospital in Colorado Springs and St. Mary-Corwin Hospital in Pueblo to form the Seton School of Nursing.

1950-1953: A Physiotherapy Department is established in the hospital for the treatment of polio cases in the area. Equipment, including an Iron Lung, is on loan from the National Foundation of Infantile Paralysis for a three-year period.

1955: A school of practical nursing education is organized through Trinidad State Junior College.

1957: A major renovation is completed on the hospital.

1969: The hospital is purchased, and comes under new administration by the Trinidad Area Health Association.

1971: A contract is negotiated to construct a complete, new 70-bed hospital.

1972: The move is completed to the new Joint Commission accredited facility.

1978: A four-bed Special Care Unit is dedicated and opened to further the hospital's capacity to administer to more seriously ill patients.

1979: A 2,000 pound ceramic mural, created by Sister Augusta Zimmer, SC, of Cincinnati, Ohio, is on the wall in the main lobby. The mural, depicting the history of Trinidad, was constructed in pieces and shipped to the hospital from Ohio. It is necessary to reinforce the wall in order to facilitate the weight of the mural.

1993: In June, the last Sister of Charity to be affiliated with Mt. San Rafael Hospital retires.

2018: A $36 million Capital Improvement Project begins at the hospital. The project - a multi-phase facility expansion and modernization plan of approximately 43,000 square feet - replaces the majority of the patient care spaces at the hospital. This is the first major facility remodel since the hospital was built in 1972.

2019: On May 6, demolition of the Southeast Wing of the hospital (formerly home to ancillary services and offices) begins.

2019: On May 16, the official groundbreaking ceremonies are held for the new building. When finished, the wing will house the hospital's new Emergency Room, Patient Care Unit and Imaging Center.

2021: On January 18, the official completion of the Facility Renovation Project was celebrated with small ribbon cutting ceremony just outside the new Southeast Wing of the hospital. And, that same afternoon, the new Emergency Department was officially opened for service to patients.